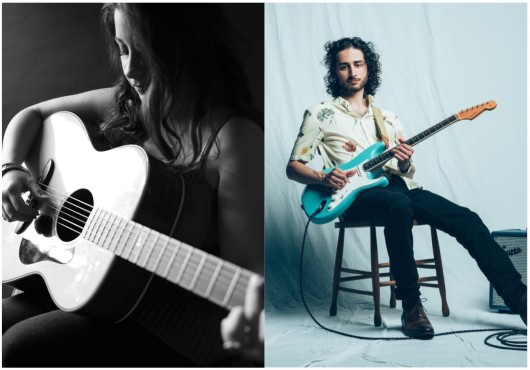 Grace Stumberg is a singer/songwriter based out of Buffalo, New York. Stumberg’s music can be described as indie folk with a very percussive style of guitar playing. Her voice transcends spirit and holds both power in range as well as an effortless dynamic of soul. Grace serves as backup singer for folk legend Joan Baez and has traveled the world sharing the stage with artists such as the Indigo Girls, Robert Plant, Josh Ritter, and many more. She has been mentioned in the Rolling Stone Magazine recognizing her performance at the Beacon Theatre for Ms Baez’s 75th birthday party. She is currently touring with Joan Baez on her « Fare Thee Well » Tour, and will be performing her own shows along the way.

“She lends something wonderful, spontaneous and youthful, and she is a tremendous talent.” — Joan Baez

Homegrown Montrealer, Justin Saladino leads his guitar-driven blues/rock group. The Justin Saladino Band has two all-original releases under their belt: the “No Worries” EP and “A Fool’s Heart” LP. Defining their sound isn’t easy, but it is clear that the compositions have been well steeped in the best of roots and pop music spanning multiple decades. Drawing inspiration from Jimi Hendrix to John Mayer and Bill Withers to Chris Stapleton, the Justin Saladino Band’s sound is a rich and colourful mix of timeless music. JSB has wowed audiences at the ‘Montreal International Jazz Festival,’ ‘Tremblant International Blues Festival,’ ‘Rogers Cup,’ ‘Trois-Rivières en Blues’ and the ‘Toronto Blues Summit.’ In 2018, the 21st annual Maple Blues Awards nominated the group for “New Artist of the Year.”

At 23 years old, Justin has already been on the scene for over a decade. Having performed alongside the likes of Victor Wainwright, Steve Strongman, Frank Marino, Paul Deslauriers, Jack de Keyzer, and Ronnie Baker Brooks; he’s seen first hand how it’s done. Learning from the masters and translating these experience into his own project, the Justin Saladino Band puts on a dynamic show, demonstrating a wide palette of sounds from heavy blues/rock riffs to folky acoustic tones all while keeping the audience grooving.